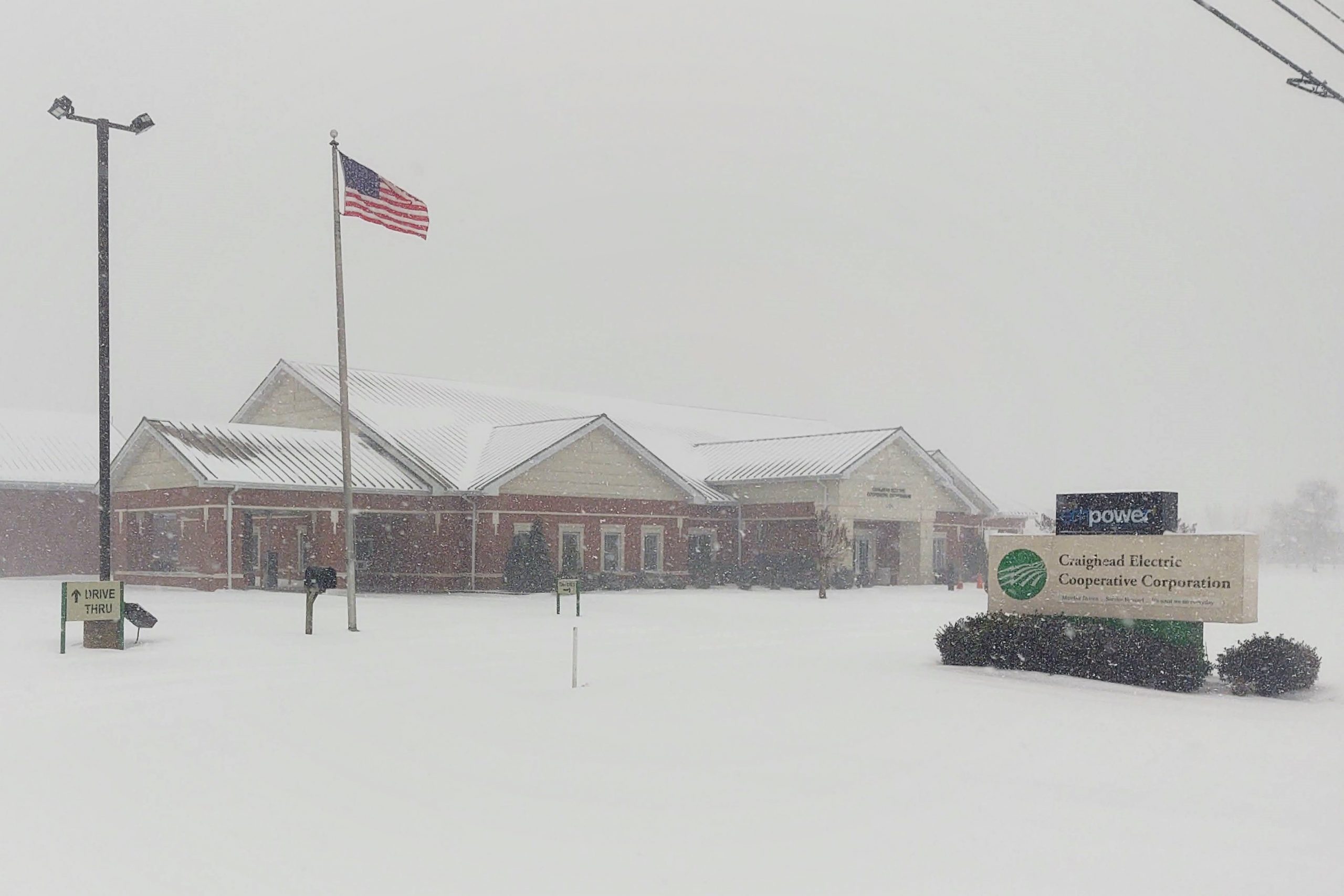 CECC HQ under snow
All,
As you know, this historic cold weather event has put a strain on the South’s electric infrastructure. Due to the unavailability of natural gas, some of Arkansas’ gas-fired plants are out of service and others are offline due to emergency repairs. Wind and solar resources are typically unavailable in extreme weather conditions. Despite this shortage, Arkansas Electric Cooperative Corporation (Craighead Electric Cooperatives sole power provider) has enough generation within the state to meet the demand of the 17 Arkansas distribution cooperatives with 4,285 megawatts of total generation capacity in its portfolio.
Several years ago, generation assets were regionalized with the goal of dispatching generation resources more efficiently on a day-to-day basis. AECC’s generation assets were pledged to two Regional Transmission Organizations (RTOs), Southwest Power Pool (SPP), and the Midcontinent Independent System Operator (MISO). SPP controls generation assets and dispatches power delivery to customers in 14 states, most of which lie west of the Mississippi River. MISO controls the generation and dispatches power delivery to customers in 15 states in the Midwest and Canada with the southernmost state being Louisiana.
We were feeling pretty good about where we stood as far as the system load last night. We felt reasonably sure we had passed the most critical time of possible interruptions due to generation/transmission issues. At 7:15 PM, we received a call from AECC notifying us that MISO had moved from a Level 3 Status (meaning interruptions are possible) to a Level 5 Status (meaning interruptions need to happen immediately). Somewhere in the MISO footprint, they had a chokepoint on the transmission system that limited the amount of power flowing through the switch point. There simply was too much demand and not enough transmission capacity to deliver the electric load, leaving MISO no alternative but to sacrifice small pieces of the load to avoid a regional blackout.
So, with about 10 minutes of warning and very little information, rolling blackouts were initiated by Craighead Electric’s power supplier under a directive from the RTO by turning off groups of substations at one-hour intervals. The first round of substations turned off at 7:26 PM including Trumann sub, Jonesboro South, and Earle. NW Jonesboro and Apt were turned off at 8:26 PM. Black Oak and Farville subs were scheduled to go off next. At approximately 9:00 PM MISO lowered their emergency status back to a Level 3 and all subs affected were returned to normal operation as soon as was possible.
In my 43 years, I have never seen events such as this. Craighead Electric’s distribution system has performed beautifully through this inclement weather and will continue to do so as long as generation and transmission power is dispatched and delivered to our substations. Our system has been built and is operated by true professionals, all for the benefit of our member/owners. We have and will continue to put our members first in everything we do.
Thank you for your understanding and patience as we work to make this situation as tolerable for our membership as possible.
Brian Duncan
Chief Executive Officer
Craighead Electric Cooperative Corp
Tags: Blackouts

Does your health rely on electricity?