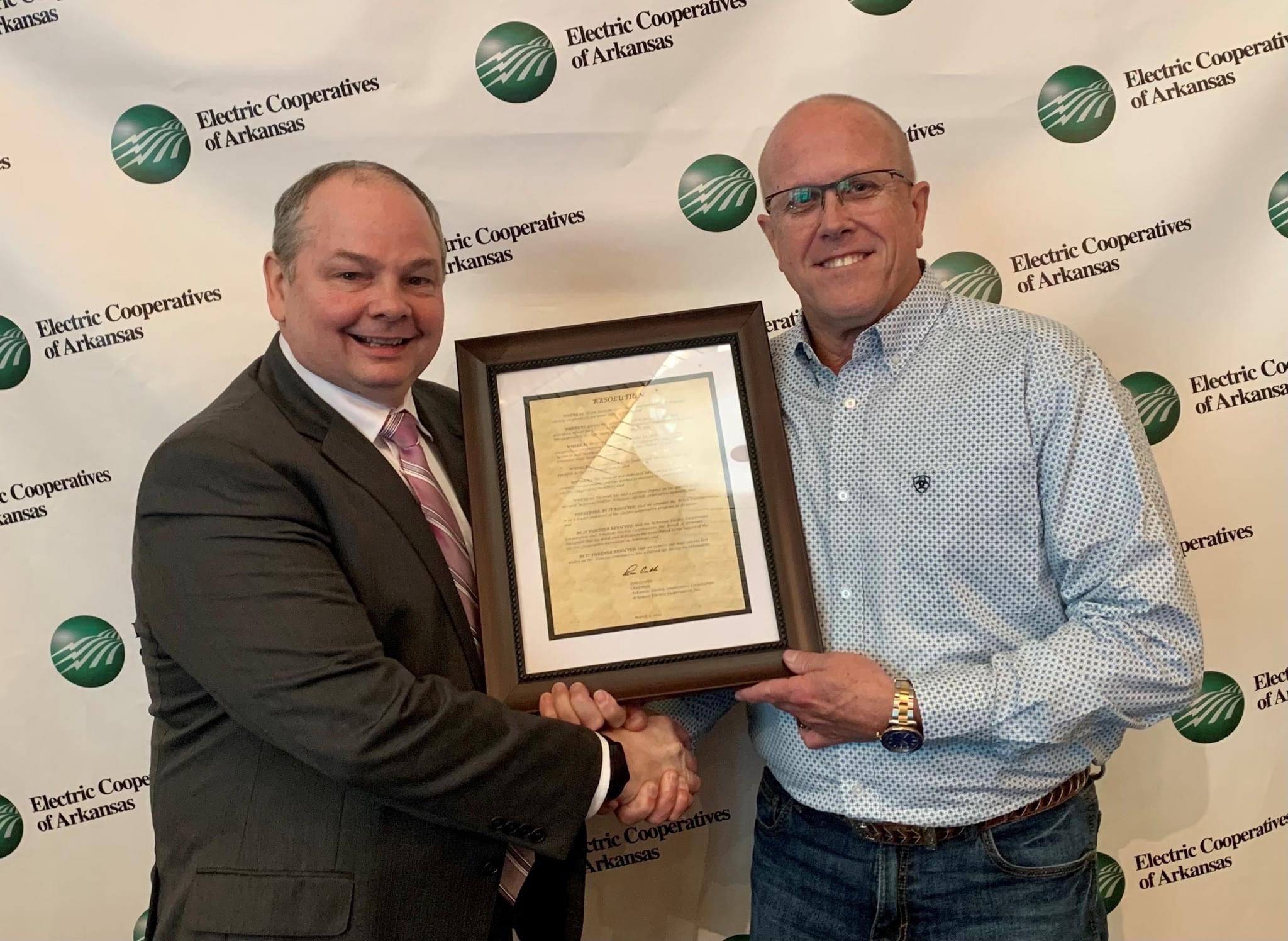 Vernon “Buddy” Hasten, CEO of AECI/AECC, recognizes Brian Duncan for his years of service to the Electric Cooperatives of Arkansas.

After 44 years of employment at Craighead Electric Cooperative Corporation, Brian Duncan has retired as CEO. He is succeeded by Jeremiah Sloan, former COO of empower Broadband.

Duncan has fulfilled many roles since he was first hired in 1978. He worked as a Right-of-Way Crew Member, Apprentice Lineman, Staking Engineer, District Manager, Key Account Manager, Manager of Member Services and Vice President of Corporate Services before filling the role of CEO in  2007. During his career at the Cooperative, Duncan completed National Rural Electric Cooperative Association’s (NRECA) Key Account Executive Program and NRECA’s Management Training. He served on the Board of Directors for Arkansas Electric Cooperative Corporation (AECC), Arkansas Electric Cooperatives, Inc. (AECI), Today’s Power, Inc., and he was the past Chairman of the Board of Electric Research and Manufacturing Cooperative (ERMCO).

During his tenure as CEO, he implemented an automated meter reading system, led the Cooperative through the worst natural disaster in Craighead Electric’s history (the 2009 Ice Storm), helped implement an exemplary culture of safety, oversaw the building of a new district office in Paragould, added 1-Megawatt of solar to the CECC grid, and started a wholly owned fiber subsidiary (empower) providing fiber-to-the-home broadband internet to the underserved membership.

Duncan says he looks forward to spending his retirement with his wife, Teressa, their two sons, Brady and Tanner, and their grandson.

Chairman of the Board of Directors, Terry Rorex, recognized Duncan in a presentation to employees, members, family and friends. “We would like to thank Brian for his professional leadership and 44 years of outstanding dedicated service to Craighead Electric,” he said. “The  positive effect of Brian’s leadership will be seen for many years to come. Thank you, and we wish you a great retirement.”

In recognition of Duncan’s commitment to the Coop, the 1-Megawatt Solar Field in Brookland, Arkansas, was dedicated to Duncan, now to be known as The Brian Duncan Solar Generation Facility.

Duncan addressed the Cooperative, “I would like to thank my dad” for giving him the kick that he needed to get a job at the Cooperative at age 18. He also expressed faith in the future of the company, saying, “I‘m confident that the Cooperative is in very, very good hands. … As the days go on, I will remain your biggest fan and most vocal
cheerleader.”