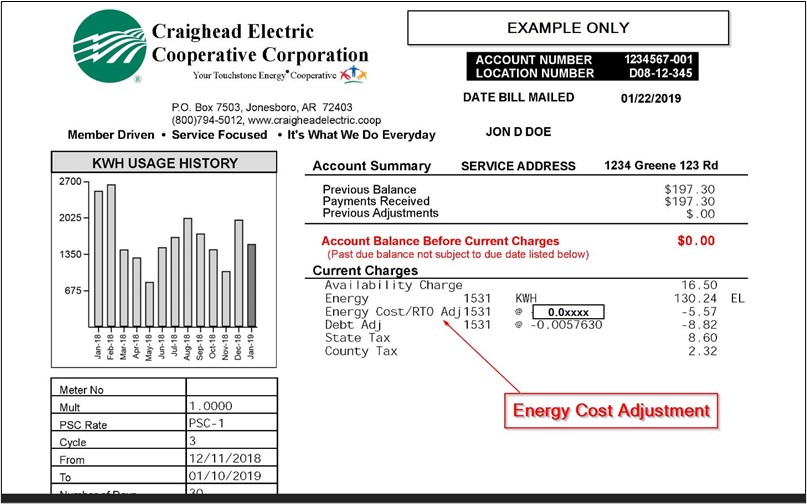 Jonesboro, Ark. — March 10, 2021 — Due to historic winter weather in February resulting in an excessive increase in electric usage, Craighead Electric members will experience a higher-than-normal electric bill.  One of the factors impacting the bill is the Energy Cost Adjustment.

The Energy Cost/RTO Adjustment line item on Craighead Electric Cooperative (CECC) bills vary from month to month.  The variance represents the fluctuating cost of the fuel used to generate base-load electricity (coal or natural gas). CECC does not own or operate any generation facilities.  All energy is purchased from Craighead Electric’s Generation and Transmission Cooperative, Arkansas Electric Cooperative, (AECC) in Little Rock.  When the cost of fuel to generate is more than is collected in CECC’s base rates, the overage is passed through to the consumer-member, at cost, as the Energy Cost Adjustment.  CECC makes no profit from this charge.  It is an expense passed directly from our wholesale provider to the consumer-member.

As reported in the news, fuel to keep generating units running during the recent cold snap skyrocketed as demand for electricity increased. Those increase fuel costs created an unprecedentedly high Energy Cost Adjustment for the month of February.  The Arkansas Public Service Commission has approved a plan submitted by CECC to allow this historically high fuel cost be spread out over the next nine months.  “Craighead Electric Cooperative realizes the financial impact this added cost would have on our consumer-members and will take whatever steps necessary to minimize the impact,” says Brian Duncan, CEO of the Cooperative.

Please contact us if you have any questions about your bill.